TORONTO, ON – (June 24, 2021) – First Cobalt Corp. (TSX-V: FCC; OTCQX: FTSSF) (the “Company”) today announced the commencement of a $2.5 million exploration program at its wholly-owned Iron Creek cobalt-copper project in the United States. The Company’s objective is to double the size of its resource over the next two drill seasons as interest grows in a U.S. domestic cobalt supply to support a growing electric vehicle market.

Located in the Idaho Cobalt Belt, the Iron Creek Project is one of the few primary cobalt deposits in the world. To date, cobalt and copper resources have been defined by drilling over a 900-metre strike extent and the deposit remains open to the east and west along strike as well as down-dip. The Idaho Cobalt Belt contains the largest primary resources of cobalt in the United States according to the U.S. Geological Survey.

“Cobalt demand for electric vehicles is projected to increase more than 250% by 2025 and Idaho is believed to be America’s best opportunity to develop a domestic supply of this critical mineral,” said President and CEO, Trent Mell. “With our Canadian refinery expansion underway, we are turning our attention to our flagship mineral project in Idaho. Drilling aims to extend the cobalt and copper mineralization at Iron Creek and test for new mineralization at nearby targets that could result in additional resources on the property.

“The Biden Administration has made several announcements that support domestic mining of critical minerals such as cobalt in order to secure and shorten America’s supply chains. First Cobalt and our Idaho mineral assets are extremely well positioned to support the Administration’s ambitions in these areas. Several new initiatives have been declared to reduce permitting timelines by prioritizing mining-related applications and allocated funding toward innovative mining projects that reduce environmental impacts. Our Iron Creek assets can help the United States on two of its most important policy files: reducing climate change and securing critical minerals for American industry.”

The primary targets for the drilling program have been interpreted from chargeability-resistivity anomalies on strike with the Iron Creek cobalt-copper deposit (Figure 1). High chargeability zones east of the Iron Creek deposit are interpreted to reflect extensions of the mineralization that can be traced over 300m in strike length. Similarly, at the western extent of the Iron Creek deposit, a high chargeability anomaly may represent mineralization along strike that has been offset along north-south trending structures along the boundaries of the Challis Volcanic cover rocks.

Iron Creek is a high grade primary cobalt deposit occurring within patented land 100% owned by First Cobalt in the United States. The larger property consists of mining patents and exploration claims (Figure 2). Historic underground development at Iron Creek includes 600 metres of drifting from three adits. An all-weather road connects the property to a state highway and the nearby towns of Challis and Salmon. Significant infrastructure is in place to support multiple drills and underground activity. The setting for mineralization is well suited for underground mining development. Iron Creek currently has an Indicated Resource of 2.2 million tonnes at 0.32% cobalt equivalent as well as an Inferred Resource of 2.7 million tonnes at 0.28% cobalt equivalent:

To date, drilling has outlined the strike extent of mineralization to over 900 metres and down-dip to over 650 metres. Mineralization remains open along strike and down-dip, suggesting strong potential for significant future resource growth. Thick mineralized zones of up to 30 metres of true thickness reflect broad stratabound lithological controls. 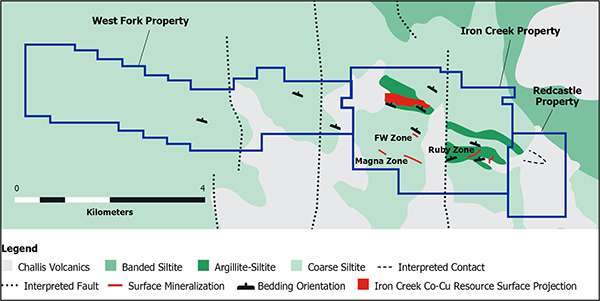 Iron Creek mineralization occurs as lenses and pods of pyrite, the dominant phase hosting cobalt, that are primarily concordant to the sedimentary layering in the host rocks. Chalcopyrite, the only copper mineral phase, is disseminated and also occurs as stringers cutting pyrite mineralization within the zone of mineralization.

The host rocks to mineralization are a finely inter-bedded sequence of siltstone and argillite with intermittent, less than 30cm thick, quartzite layers. Ripple and dune sedimentary structures are well-preserved throughout the mineralized sequence. A higher proportion of quartzite layers have been mapped above and below the mineralized zone at surface marking the stratigraphic hangingwall and footwall to mineralization.

Iron Creek is one of many cobalt-copper resources and prospects within the Idaho Cobalt Belt. Mineralization-style throughout the Belt is considered to be stratabound meta-sedimentary rock hosted. The United States Geological Survey deems these resources in Idaho to be strategically important as a domestic supply of cobalt.

The Ruby Zone is located 1.5 km to the south of the known resource area at Iron Creek (Figure 1). Surface samples were collected along 146 metres of strike to test the metal content of mineralization and to examine the nature of the host rocks. In total, exposed cobalt-copper mineralization is visible at surface over a 295-metre strike extent. Ninety-six discontinuous samples were collected and assay results returned multiple mineralized intervals, including 10.7m of 0.24% Co, including 1.5m of 0.48% Co, and 7.6m of 0.26% Co in a similar setting to Iron Creek (see October 30, 2019 press release). 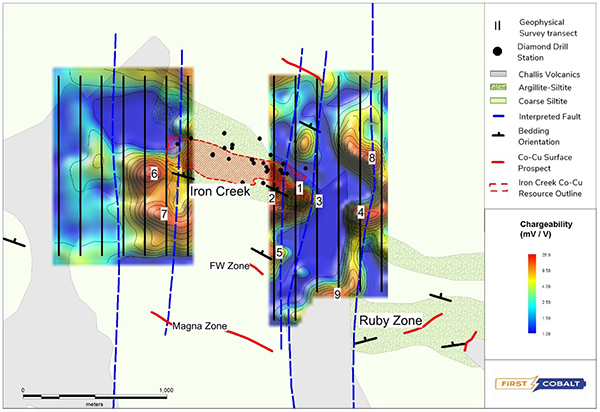 Dr. Frank Santaguida, P.Geo., is the Qualified Person as defined by National Instrument 43-101 who has reviewed and approved the contents of this news release. Dr. Santaguida is employed as Vice President, Exploration for First Cobalt.

First Cobalt’s mission is to be the most sustainable producer of battery materials. The Company owns North America’s only permitted cobalt refinery, a critical asset in the development and manufacturing of batteries for electric vehicles. First Cobalt also owns the Iron Creek cobalt-copper project in Idaho, USA as well as several significant cobalt and silver properties in the Canadian Cobalt Camp.

Fill in the form below to submit your questions

Alert us about risks of wrongdoing affecting people, our company, society, or the environment.