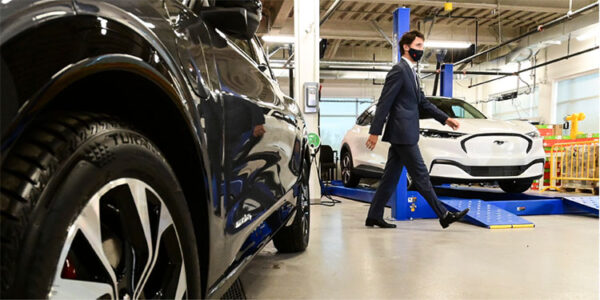 Photo: Prime Minister Justin Trudeau arrives to hold a press conference at the Ford Connectivity and Innovation Centre in Ottawa on Oct. 8, 2020. THE CANADIAN PRESS/Sean Kilpatrick

The Biden presidency presents enormous opportunities for the private sector in both the United States and Canada to work with government. The most significant initiatives over the four years of Joe Biden’s term may well be policies addressing climate change. In order for the United States to meet the emissions targets set out in the Paris Agreement, aggressive actions will be required by the White House and Congress to influence industrial and consumer behaviour.

With his commitment to install up to 500,000 electric vehicle (EV) charging stations, Biden is sending a clear message that his administration will support EV adoption. Biden also plans to increase existing incentives and tax breaks for electric vehicle purchases, and shortly after his inauguration, he reiterated his campaign commitment that the U.S. government will move its entire fleet of vehicle to zero-emissions vehicles. We should also expect to see a Biden administration revert to the Obama-era fuel emissions standards and move more aggressively toward zero emissions.

These developments in Washington present a unique opportunity for Canada. We have the industrial footprint, the raw materials and the engineering talent to be a major player in the EV battery supply chain. Policy-makers should seize the moment presented by the Biden administration.

Biden’s US$2 trillion Clean Energy Plan includes sweeping proposals designed to create economic opportunities while also tackling climate change, notably by addressing one of the largest sources of emissions in the United States: internal combustion engine vehicles. EVs represent a critical macroeconomic trend over the next decade, and the competition to capitalize on this expanding market – for governments, investors, and consumers – is well and truly on.

The electric vehicle revolution has been described as an “arms race.” North Americans have lagged behind Asia and Europe in electric vehicle adoption but make no mistake, change will happen quickly. Biden’s focus on climate change, electric vehicles and associated investments, will pour rocket fuel on what is already one of the most consequential trends today – the shift to reduce carbon.

In North America, Tesla has been synonymous with electric vehicles and consumers have had precious few choices when in the market for a pure battery electric vehicle. The epicentre has been China, which has over 100 different models of electric vehicles, with strong regulatory and financial incentives that have accelerated adoption rates. In 2020, Europe came of age and the continent overtook China in total passenger sales. North America has been a laggard in electric vehicle adoption but that could change very soon.

The number of passenger electric vehicles in the U.S. is expected to more than double from 16 in 2020 to 39 in 2021. By 2025, it is estimated that more than 120 new models of EVs will be available in the marketplace, covering everything from pickup trucks, SUVs, and crossovers – vehicles that have great appeal to North American consumers. As consumer demand shifts to EVs, so, too, must industrial investments.

The transformation of the automotive supply chain will give Canada – and North America – an edge when it comes to competing for the billions of dollars of capital investments that are being made by companies and governments around the world in anticipation of increased consumer demand for electric vehicles, batteries that power them and the minerals that make it all possible.

Late last year, Canadian federal and provincial governments announced contributions of C$590 million in electric vehicle and battery assembly at Ford Motor Company’s operations in Canada’s automotive heartland. This investment secures jobs in the auto sector as the electric vehicle revolution picks up steam and will have ripple effects across the auto parts sector. This announcement was followed other significant investments including General Motors’s decision to invest C$1 billion at its CAMI plant in Ingersoll (Ontario) to produce commercial electric vehicles. These and other public and private sector investments will create enormous economic opportunities, fostering job creation and growth and are excellent steps toward positioning Canada as a global leader in the electric vehicle supply chain.

However, there’s more for Canada to do to transform our automotive sector, and battery production must be at the heart of any next steps governments take in this area.

Practically speaking, the new White House approach to climate change means policy-makers in Canada must continue picking winners and supporting them with financial and regulatory measures that foster investment.

This includes dedicated funding programs and tax measures to match investments from the private sector. In December 2019, the European Union approved €3.2 billion in subsidies aimed at helping Europe boost its lagging competitiveness in the electric battery sector. The payoff for Europe was almost immediate: sales of electric passenger vehicles were up 137 per cent year-over-year in 2020, surpassing China. The European Union has decided to begin 2021 with a bang, and recently announced an additional €2.9 billion to support additional battery investments in research, development, and production. The goal is for Europe to be able to produce its own battery cells by mid-decade.

Canada has something the Europeans do not: vast mineral deposits. With these deposits, our governments should bet on the electric vehicle supply chain with a specific emphasis on the full supply chain for battery production. This involves mining battery materials, chemical processing, battery cell manufacturing, battery pack assembly, and – to complete the life cycle – battery recycling.

In creating this complete value chain, Canada would create jobs and opportunity for northern and remote communities. Batteries are the most expensive component of the electric vehicle, and Canada’s unique value proposition with mineral deposits – coupled with decades of investments in the primary automotive value chain in Southern Ontario – put the country in a compelling position in order to attract these investments.

There’s no reason why LG Chem, SK Innovation or Panasonic shouldn’t be looking at Canada for their next battery manufacturing facility. We need a Team Canada approach to attracting this investment – in the same way the federal and provincial governments court automotive investments. Government funding programs would match private sector investment dollars. Canada can win the battle to create a North American battery supply chain given our abundant natural resources, proximity to clean sources of power (including hydro and nuclear), proximity to markets, and deep pool of engineering talent.

The Biden administration has correctly recognized the future of the automotive industry as being green, and that electric vehicles will be the preferred choice of consumers as society moves toward a cleaner future. Canada has all the ingredients to be a leader in electric vehicles, but time is of the essence.

Fill in the form below to submit your questions

Alert us about risks of wrongdoing affecting people, our company, society, or the environment.